The Vikings were terrific fighters. They came from Scandinavia, and their first known, frightening attack in Europe was committed on June 8, 793, against the monastery of Lindisfarne Island (or the Holy Island) of England.

This attack has been followed by many others for centuries. By the end of the 11th century, Viking warriors were dreaded in Western and Southern Europe and England. The Viking conquerors went west to North America, conquered Greenland and Iceland, while a Rusyn state was founded in the east in today's Russia by Vikings. Brave, well-established Viking warriors were not afraid of death, they could move quickly, and often gained edge with the surprise against the slow defense. The most beloved weapons of the Vikings were swords, fighting axes, and stabbing weapons, sometimes they used bows and arrows during raids. 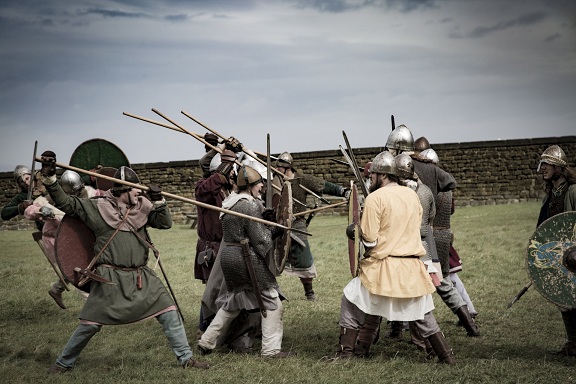 Swords were the most popular weapons of the Vikings, but not all Viking warriors could afford them. In fact, they were the same kind of status symbols as cars today, wealthier or proficient fighters had better-quality, well-crafted swords. The blades of the swords were usually double-edged, with a blood channel in the middle. Often blades were made by damascene techniques. The fishbone pattern blades were common, and inscriptions and engravings often decorated the more valuable swords. The Scandinavian blacksmiths made high level works. The blades have often been decorated with many ornaments. However, the grip of the sword was made even more carefully with decoration, often with silver or gold inlay. The scabbards were leather outside, covered with wool in the inside, which protected the blade against rust. Viking fighters often personalized their swords, giving them all kind of different names.

While swords were status symbols and were mostly a privilege of the higher rank, any Viking warrior on the battleground could afford a fighting axe, as the preparation of the axes needed much less work and skill, so they were cheaper. Unlike the swords, the fighting axes were usually not decorated, in fact they looked much like the woodcutter axes.

In addition to the sword and fighting axe, the Viking warriors liked various stabbing weapons. Almost all Viking fighters had single-edged bladed knives (called scramaxes), and some of them also had spears with a tip of up to 50 cm in length. The scramaxes were single-purpose blades suitable for stabbing, and they were made in a variety of sizes. The dart was used as a bouncing weapon, which was smaller and lighter than the spear. The spears were successfully used by the Vikings fighting in phalanx. Stabbing and butting from the front of the tightly shielded wall led to great destruction in the ranks of the enemy. There were larger, fanciful spears attached to the elite or their bodyguards.